in Breakfast, Cooking Together, Food

Quaran-cooking has been an adventure. Lots of time on our hands, boredom, missing ingredients and the, errrr, eating whatever and whenever I want has led to some fun discoveries and recipes. We had leftover Challah and I wanted to try something new with it than just our usual French Toast. I had just talked to Nate about trying another bread pudding (I made my first one back in December), so I started researching French Toast Bread Pudding.

I never intended on sharing this one so quickly but had so many requests, I decided to post it for my first quaran-recipe. I had been on a savory kick for a bit, making Eggs Benedicts and various quiches, so I don’t make sweet things that much. And I usually like to test a recipe more than once before sending it out into the wild, so if you come back in a few weeks, it might be just a tad different, but overall I don’t think it will change since it was SO delicious and SO easy. This Overnight French Toast Bread Pudding swaps out some whole eggs for egg whites, milk, and heavy cream for vanilla oat milk, and cuts out almost all of the sugar in regular recipes. There’s still plenty of carbs and maple syrup, so if you came here for a recipe to fit your diet, I’m so sorry you’ve come this far. The swaps largely came from a lack of ingredients but turned out so perfectly moist and delicious, I would make it again like this every time.

Evelyn was a huge fan of the recipe. I didn’t even have to put maple syrup on it! I’m not opposed to a little syrup, but she actually doesn’t love it, so it works out.

I made this on Sunday night/Monday morning and we had plenty for Evelyn and myself for the entire week. Nate even snuck in a piece or two. 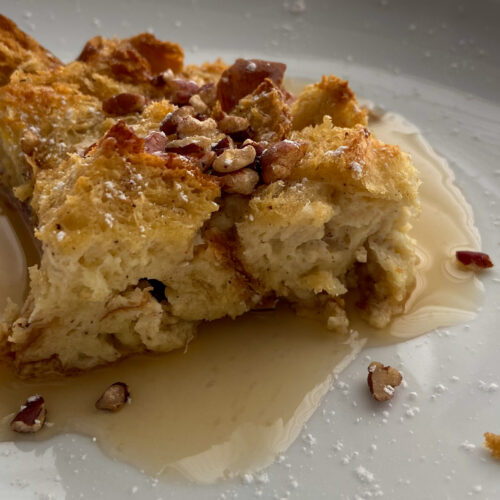 An easy recipe you can make the night before and pop into the oven the next morning for a lightened-up breakfast treat for the whole family.
4 from 1 vote
Print Recipe Pin Recipe
Prep Time 20 mins
Cook Time 45 mins
Resting Time 12 hrs
Course Breakfast
Cuisine American
Servings 10

Happy 10th Birthday to the best puppy son ever. Br