It Takes Two to Mango {Salsa}

in Food
I recently went to a good friend’s big birthday celebration and it was potluck (the best kind of party). There was fajitas, enchiladas, guacamole, churros (yes, there was a theme) and so many other good things being brought, I was at a loss! It sounded like the party had everything it needed. What was I supposed to make?!
I reached out to the birthday girl and asked what she wanted, and after some poking, we had a request…. Mango Salsa!
I hadn’t made a fruity salsa in ages. It’s something I enjoy on fish tacos, but don’t ever actually think about it as a salsa. I mean, define a salsa. You would say either, (1) a dance that you pretend like you can do, but actually look terrible doing it; or a (2) tomato sauce. But it sounded delicious, especially given how hot it’s been here, and the birthday girl gets what the birthday girl wants!
So we did some research and some experimenting, and may we present you with my ‘It Takes Two to Mango {Salsa}.’ 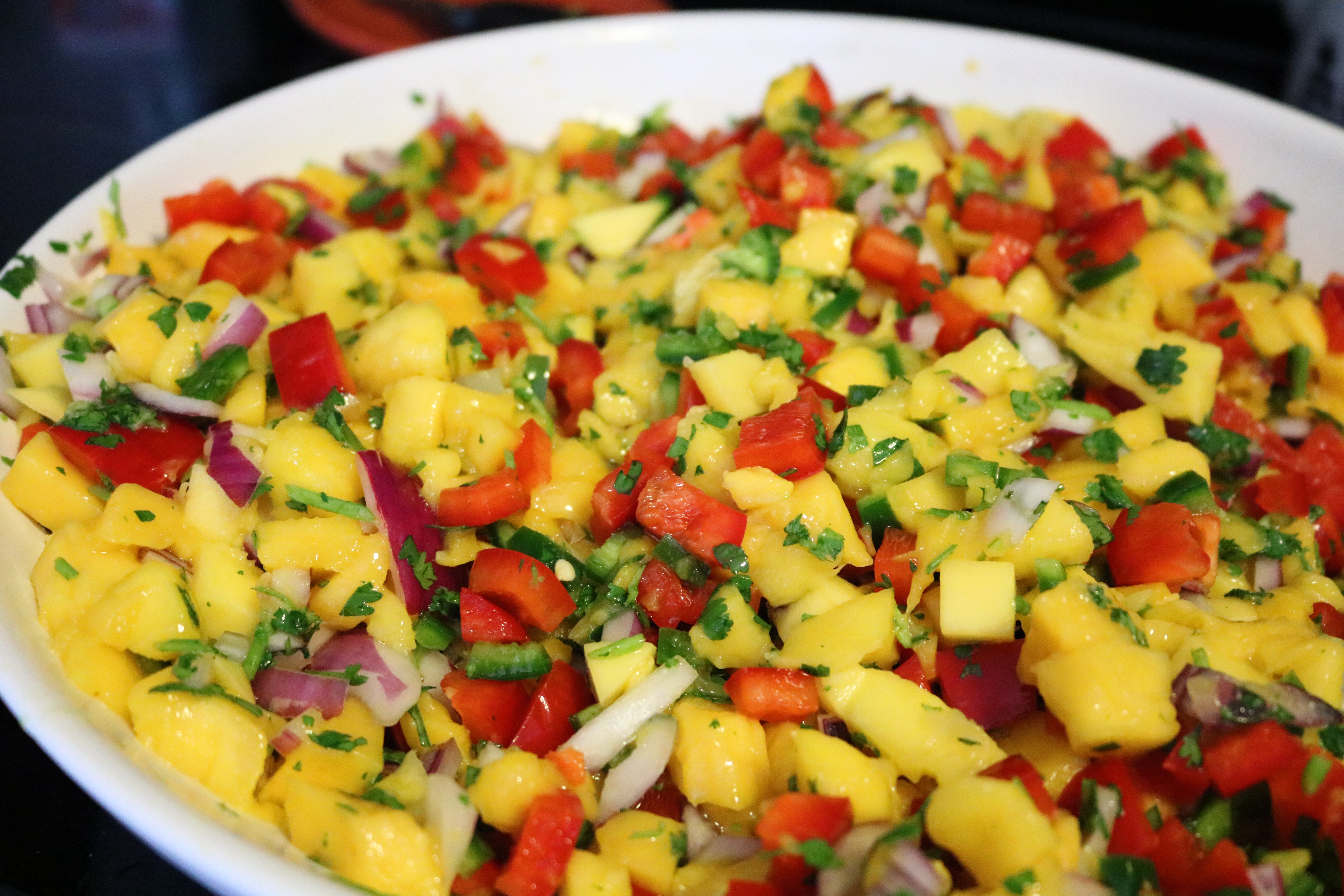 Tip #1: Get someone to help you chop. There’s a lot of chopping (Thanks Nate!). The recipe is named after his helpfulness. 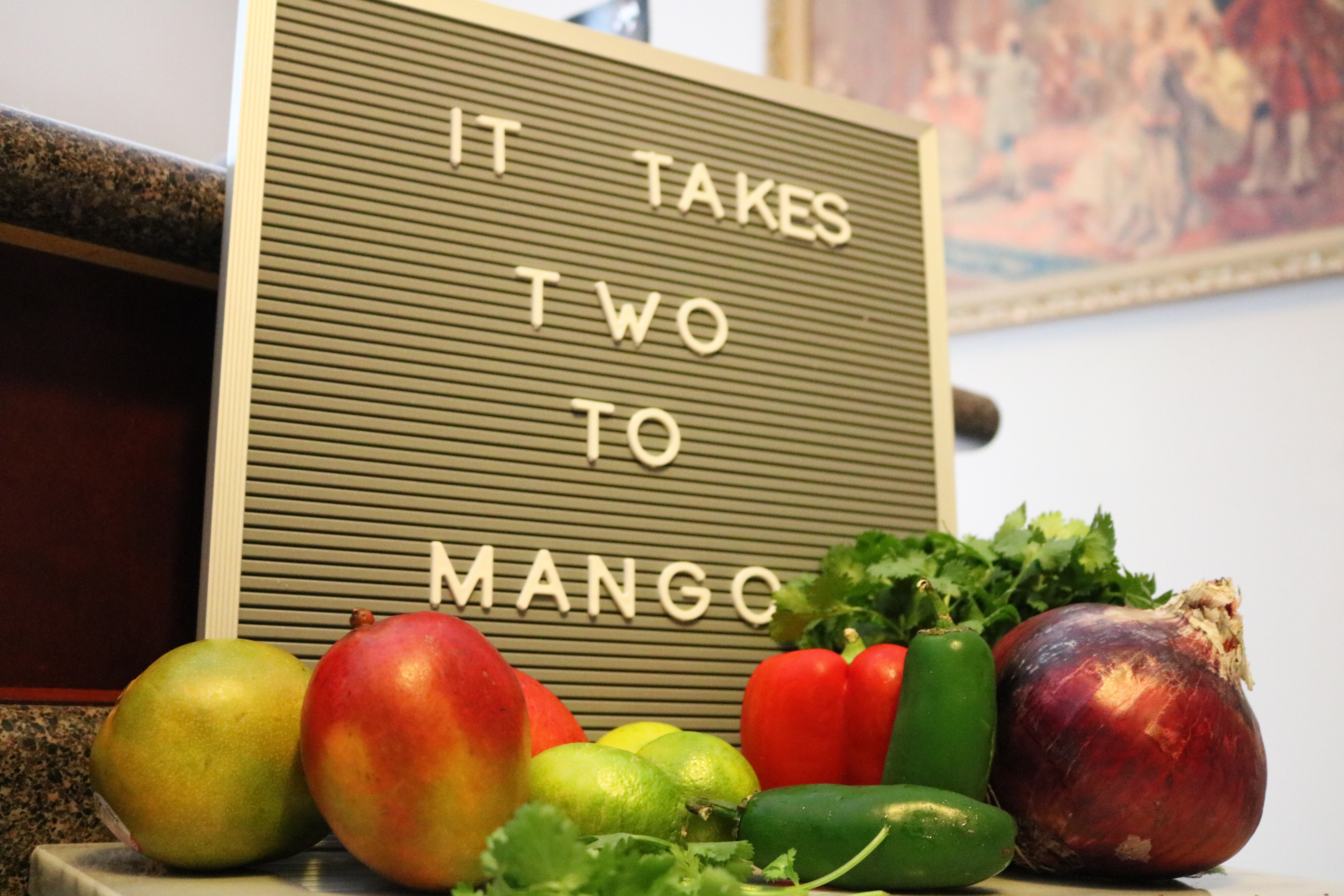 Tip #2: Fresh lime juice just tastes better. Squeezing juice isn’t my favorite, but deal with it. One of the best ways to get juice out of a citrus is to cut the ends off, before cutting it in half, and then use a citrus squeezer. They’re super cheap! If you don’t have one in your kitchen, run down to the Dollar Tree or check out Amazon. 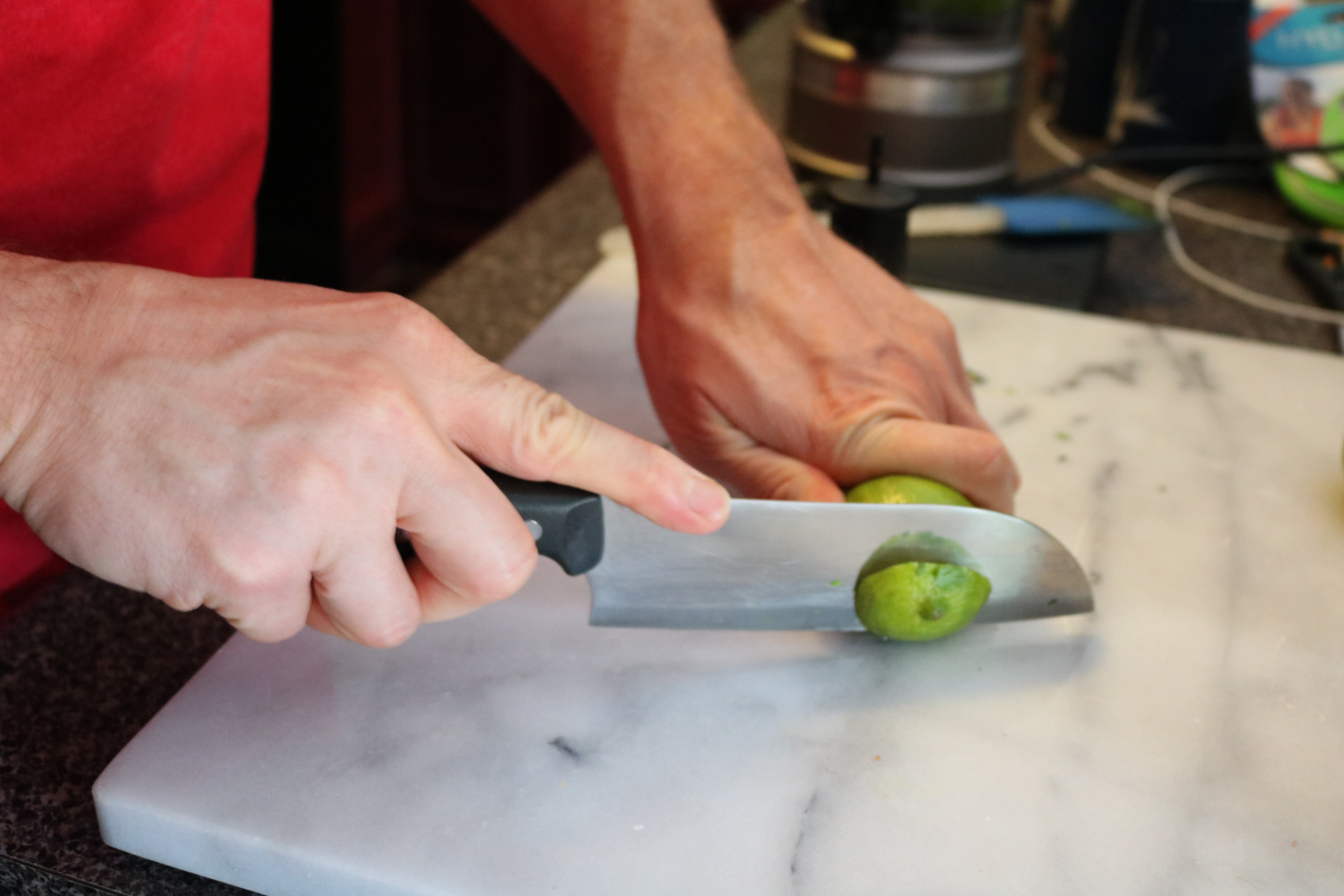 One of the best things about this recipe was slowly adding the layers in and seeing the colors build. I kept saying, IT’S SO PRETTY, loudly and often. Because IT’S JUST SO PRETTY! 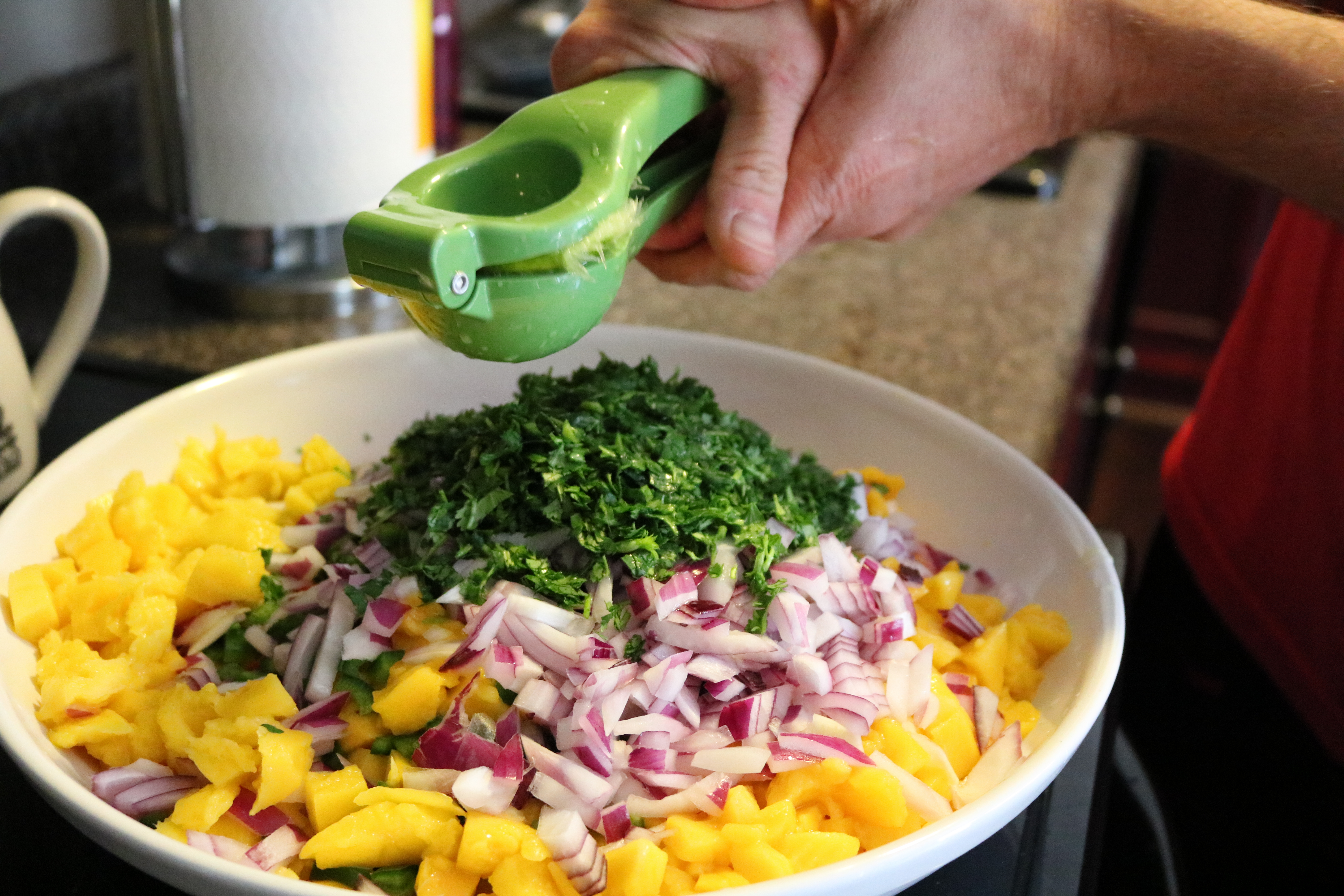 We tried it at the party with all the different chips that were brought, but our hands down favorite was the Food Should Taste Good Multigrain Tortilla Chips. Something about the flavoring of the multigrain compared to the regular corn chip just made it pop! 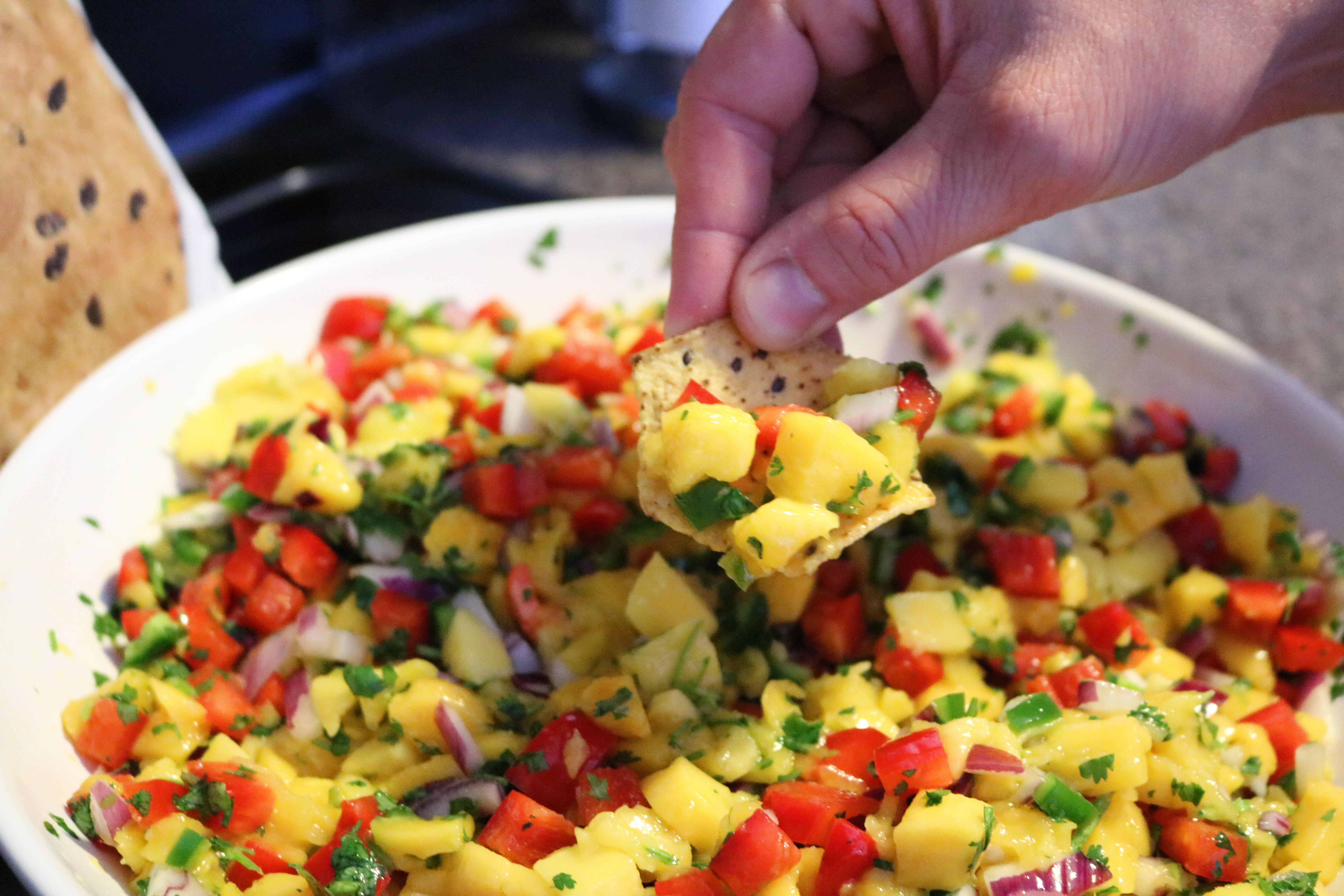 We saved some of the salsa for some post-party snackings, but I actually put it on some Cajun-seasoned grilled fish, and that is also amazingly delicious! I was also told by the birthday girl that she did, in fact, just eat the salsa for breakfast. It’s basically a fruit salad, right?
This recipe was made for a small party portion, but is easy to multiply and divide depending on your wants and needs.
Enjoy!

Happy 10th Birthday to the best puppy son ever. Br