in Life
It’s time for another short list! Where did November go? Between the election and Thanksgiving scramble, the month seemed to have flown by. The weather is getting colder and the holidays are getting closer. It’s time for new commitments, new things to try and new things to add to the list!
Currently buying:
I LOVE getting things in the mail: letters, invitations, magazines, packages! It’s been a thing of mine ever since I was young. So when subscription boxes became a thing, I really wanted to get in on the action… except that I wasn’t into makeup, I liked making my own recipes, wasn’t interested in gaming. After much searching, the perfect subscription box actually found me! Barbella Box followed me on Instagram and it was love at first sight. Barbella Box is a monthly subscription box filled with items for functional fitness/CrossFit. I’ve been a “barbella” for six months now and have never been disappointed my a box! I was hesitant at first to pay $49.99 a month, but the actual price on the box has been double, or often triple that. Knee sleeves, weight belts, booty shorts, samples I would never normally purchase (and now love) and custom made items from sponsor athletes like Christmas Abbott and Lauren Brooks.
Currently watching:
This year, I said goodbye to New Girl, a longtime favorite. I wasn’t laughing anymore and wandered around doing chores instead of trying to think of ways I can use the quirky one-liners in my daily conversation. So when I let go of that, I was really missing out on a quick fix 30-minute comedy. Enter, The Good Place. Many were skeptical before it aired, but this show is my new quirky farce that I look forward to every week! I knew I was a huge fan of Kristen Bell when she once admitted that she was scared she’d never love her newborn as much as her dog. She is perfect as Eleanor Shellstrop, a terrible person that accidentally found themselves in “the good place,” giving it a real three-dimensional aspect with a character that could have easily fell flat. Ted Danson as Michael, the architect of the heavenly place, is also a national treasure. They are surrounded by a cast of characters that are both ridiculous, but easily relatable. It doesn’t hurt that they received an 89% on Rotten Tomato… Now’s your time to catch up with television shows on winter breaks!
Currently eating:
ICE CREAM! Okay, there’s clearly a pattern here and I love desserts… but Halo Top Ice Cream has meant that I haven’t had to give up my day to day sweet tooth! Each pint of ice cream has between 250-350 calories… yes, you did read that right: THE WHOLE PINT! They also have 24g of protein and are low in fat. We’ve all tried the diet ice cream and made do with it, even if it didn’t taste great, but the most amazing thing about Halo Top is that it actually tastes great. It’s thick and creamy, similar to hand churned ice cream. My current favorite is Cake Batter, but since their release of new flavors, I haven’t even tried them all yet!
Currently excited about:
I am extremely lucky to have the whole week off between Christmas and New Year’s (yay, agency life!), but I’m even more lucky that my husband, Nate, was able to take a lot of those days off with me! For me, this is extra exciting, because Nate works on weekends, so we rarely have days off together. We decided to turn part of that week into a staycation in Birmingham, and I can’t wait! Look forward to a blog post about that.
So now it’s your turn! What are you into this month? 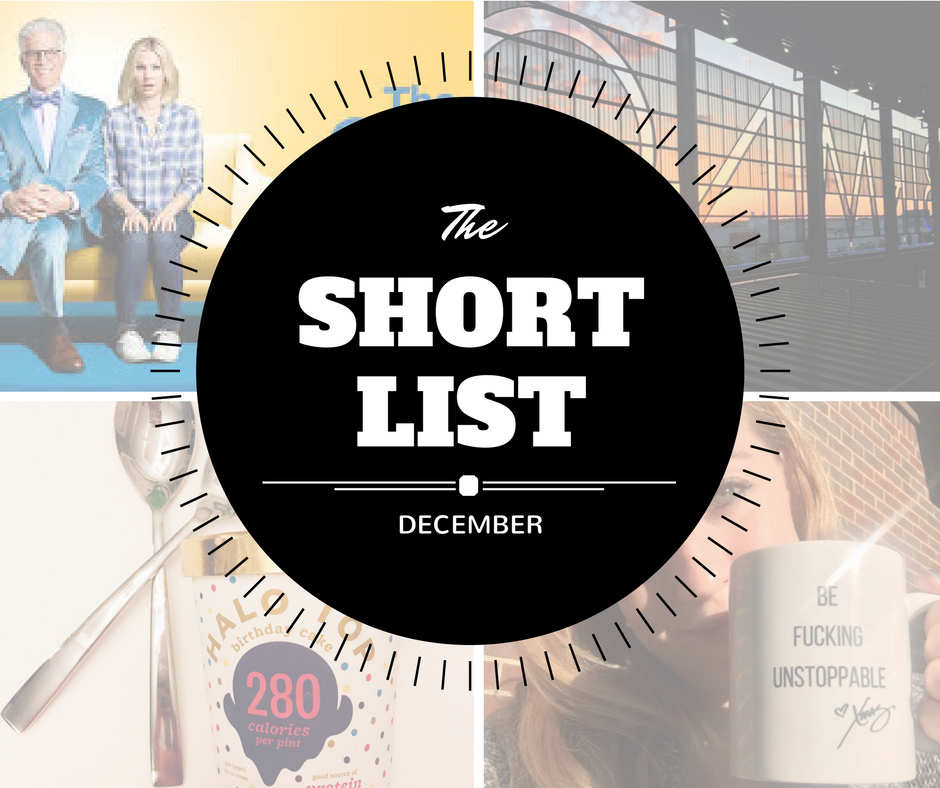